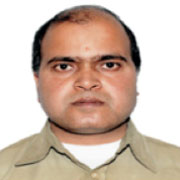 Dr. Arvind Tiwari was born on July 24th 1975 in Ballia,U.P. His primary and secondary education has been from Kendriya Vidyalaya. He has done Bachelors in Physics and Master of Science in Material Science from Jamia Millia Islamia(1996/1999) and Master of Technology in Microelectronics from Punjab University(2002). He worked as a lecturer in ITM Gurgaon for a year. Later, he joined as a research scholar in IIT Delhi in the year 2003 and completed his Ph.d in the year 2006(Hybrid Photovoltaic Thermal System).

After his Ph.d, he joined as lecturer in College of Engineering and Technology (CET) BRCM, BAHAL, Haryana. In year 2006, he joined Krishna Institute of Engineering and Technology (KIET), Ghaziabad as Assistant Professor. He did his post-doctoral fellow from University of Twente, Netherland. For a short period, he was Associate Professor in Department of Electronics and Communication Engineering in Galgotia College of Engineering and Technology (GCET), Greater Noida, U.P. He has worked as one of the Indian Expert in the capacity of senior lecturer in Manmohan Memorial Polytechnic, Morang, Nepal on deputation from Government of India from January 2010 to January 2012.Later he joined as Professor in Department of Electronics and Communication and at JSS Academy of Technical Education, NOIDA, U.P.

His research interest is in the field of Solar Energy Applications focused on Hybrid PV system with applications in various fields such as solar distillation, water/air heating system, greenhouse technology for agriculture, building integrated PVT systems (BIPVT) etc. He has recently co-authored one book titled “ Handbook of Solar Energy: Theory , Analysis and Applications”

He is also one of the founder of Bag Energy Research Society (BERS: www.bers.in) which is responsible for energy education in rural India and secretary of Bhawani Tiwari Memorial Trust ( BTMT).