CHIEF PATRON OF THE SOCIETY 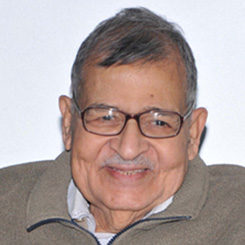 Professor Mahendra Singh Sodha was born in Ajmer district of Rajasthan on February 8, 1932. He pursued his higher education at the University of Allahabd. After his D. Phil in Theory of Spectroscope Instruments in 1955, Professor Sodha joined Defence Science Laboratory in Delhi for a short period. From 1956 to 1964, Professor Sodha worked in Canada and USA in different capacities. He was appointed as Professor in the Department of Physics at the Indian Institute of technology, New Delhi, in 1964.

Professor M.S. Sodha has made outstanding contributions in the area of Energy, Fusion Plasma, Solid State Physics, Optics, Combustion and Ballistics. He has published more than 500 research papers in the national and international journals of repute. He has to his credit 13 books and 12 reviews. He has also supervised more than sixty-five students, leading to their Ph.D. degree from IIT Delhi and other Universities.

Professor M.S. Sodha was awarded the prestigious S.S. Bhatnagar Award in 1974, Hari Om Ashram Prerit Shri S.S. Bhatnagar Award in 1978 and Padmashree award in 2003 for his outstanding contributions in Science and Engineering. Professor Sodha is the fellow of large number of professional bodies, which include Indian National Science Academy and National Academy of Science, India. He is also the member of Editorial Boards of several National and International Journals of repute.

Professor Sodha has played an active role for the promotion of higher technical education in India. He has been instrumental in setting up Center for Energy Studies at IIT Delhi and Faculty of Engineering Science at Indore.

In recognition of his outstanding contributions in the areas of Science, Engineering and Technology in the country in general, PADMASHRI was conferred to Professor Mahendra Singh Sodha by President of India in 2003. He has also received Rajarshi Tandon Shikshak Samman (UPRTU, Allahabad), 2010.

He is currently Ramanna Fellow and visiting Professor Department of Education & Physics, Lucknow University, Lucknow (UP).