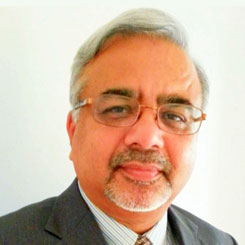 Dr. Alok Srivastava was born on August 07, 1957 in Varanasi (India). He did his Master of Engineering (ME) from The George Washington University and also studied at University of Maryland and Johns Hopkins University. He did his doctoral work at the Center of Energy Studies, IIT Delhi in the group of Prof. M. S. Sodha and also worked as Senior Scientific Officer at IITD. From 1980-81 he worked at Solar Energy Research Institute (SERI) in Golden, Colorado.

Since 1982, Dr. Alok is in Washington DC, worked for Computer Sciences Corporation (CSC) and TRW. Since 1994 he is Technical Fellow with an advanced systems engineering company which is a spinoff of Lockheed Martin and Northrop Grumman. He primarily advises the US Federal Government in development of large high reliability safety critical command and control systems. He is Executive Member of an Association of Computing Machinery (ACM) SIG and Managing Editor of a journal on high integrity computer programming languages.

Alok is involved with several Indian community activities in Washington DC metro area and is Director of Virginia Interfaith Center for Public Policy to advise Governor and legislative bodies to better serve low-income, vulnerable, and underrepresented communities in the Commonwealth of Virginia.

The governing body has appointed Dr. Alok Srivastava as an Honorary Ambassador and Foreign Executive Secretary to the Society.